Deceived Part 2 - Paris is out today! 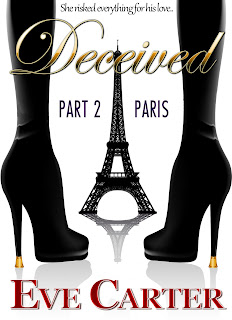 So excited to announce that my book Deceived Part 2 - Paris is out today for kindle. As a big thank you to all my followers and readers, I am having a 99 cents sale on both books this week. You can get Deceived Part 2 here: http://amzn.to/13v8ZuR

From the back cover:
Heartbroken and deceived, Chloe Swanson, looking for a distraction to mend her broken heart, accepts a job offer, helping a friend to open an art gallery in Paris, France. Her trip to Paris launches an avalanche of adventures, that leaves little to the imagination. Will Chloe ever forgive Patrick Collins for breaking her heart, or will Paris, the City of Love, provide her with new opportunities?

“Welcome to Air France,” the smiling blond flight attendant said with a cute French accent, extending her arm guiding me to the left. As I inched my way down the cabin aisle past her, I tried not to bump my carry-on bag into her sharply dressed figure.
Friday had finally arrived. The last couple of days had been a whirlwind trying to pack for my trip with Ryan to Paris. I always had a hard time consolidating all my clothes into the limited amount of luggage allowed. It baffled me how some people could do the, “I’m only bringing a carry-on bag”, thing to avoid going through baggage claim. I had laden myself with bags, jacket, scarf, purse and anything else I could manage to hang on my body, in an attempt to use it like a pack mule, and extend my “allowable luggage” to include my body itself.
“Excuse me, excuse me, excuse me...” I apologized my way down the first class cabin craning my neck to find my seat number.
“Chloe, we sit over here to the left,“ Ryan said. “I’ll be up front and your seat is a little farther back,” he said pointing with his chin.
Ryan had booked his ticket weeks ago and fortunately, he managed to get me a seat on the same flight, however we were not seated next to each other. That didn’t matter though, I was ecstatic. Ryan had generously booked us in First Class. Not only had I never been to Europe, I had never flown First Class before. Who knew what other “firsts” I would encounter on this trip? I felt like my cocoon days were over and I finally morphed into a butterfly...well maybe not a butterfly, but I was ready to be adventurous and try new experiences. I guess I had found the remedy to help me get over Patrick. This trip to Paris was the magic potion I needed.
“Sure Ryan,” I said as I clunked past the restroom, my gaudy oversized tote bag obnoxiously scratching the wall.
“They’ll take good care of you here. Be sure to reserve the complementary neck massage and by the way, all the drinks and meals are free but go easy on the champagne, he jokingly warned. “I don’t want to have to carry you and all your crazy bags off the plane.”
“Don’t worry, I’ll behave on the flight but I can’t promise anything after that,” I replied with one eyebrow raised.
I had to pinch myself and give a mental "woo-hoo" as I turned to search for my seat number. Finally, I spotted my seat completely in the back, the last row of First Class and someone was already sitting in the seat next to mine, hunched over, arranging a bag or something. I groaned to myself, hoping it would not be an oversized old guy with bad teeth and greasy hair, who would want to talk my ear off the entire flight. As I approached my row, the huddled figure in the seat looked up and my eyes were met by a pair of dark deep set eyes, framed in a very handsome square face. He pushed back a few strands of long dark hair that fell out of place as he got up and my eyes froze on his powerful chest and shoulders. 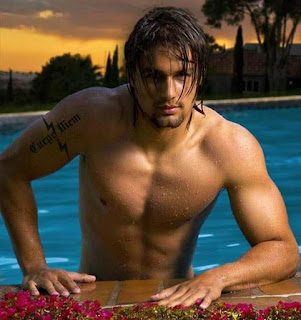 
“Well, yea. I train on the track and off the track, but let’s talk more about you. Are you sure that you’re not a model?”

Hope you enjoyed the excerpt. You can continue reading here: http://amzn.to/13v8ZuR